This recipe is similar to Wafū Pasta 1 except it has a nutty aroma from the toasted shirasu (a general term used for baby fish that are still white such as baby sardines and baby anchovies), and the sesame seed oil. As I mentioned in the Wafū Pasta 1 post, Wafū (pronounced wafoo) means Japanese-style. You'll often find Japanese-style Western dishes in Japan. If you're tired of your regular old pasta, give this a try!

Directions
1) Boil water and cook pasta.
2) Wash and cut the shiso chiffonade.
3) Thaw out shirasu if frozen.
4) Heat up a frying pan and add the sesame seed oil.
5) Stir fry the shirasu until they start to turn a tan color. You'll know they are ready because they will start to pop in the pan, plus they'll smell delicious. When the shirasu is done, take them out of the pan and set aside.
6) Heat up the frying pan again, this time add the vegetable oil.
7) Add the minced garlic to the pan and stir fry about 10 seconds.
8) Add the pasta to the pan and continue to stir fry. Add the shirasu, black pepper, salt, pasta water and kombu cha if you have any.
9) Serve on a plate and top with shiso. Last but not least, drizzle some sesame seed oil on top. This is key!
10) Mix in the shiso and eat immediately. 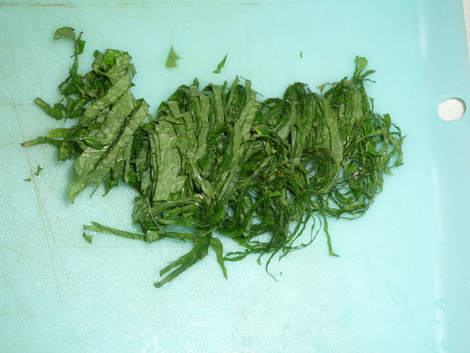 Shirasu comes packaged frozen, dried or fresh. The fresh and frozen ones come in packages like this. 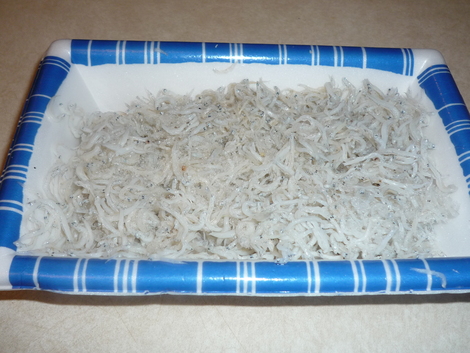 Mince about 1 tablespoon of garlic. 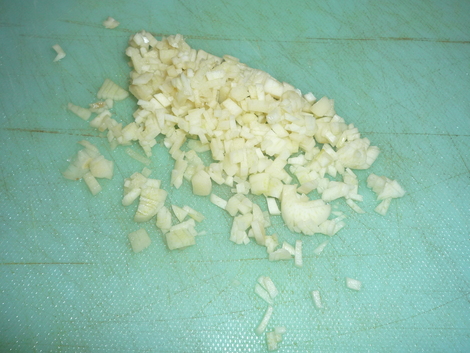 Add the shirasu to a hot pan with sesame seed oil. 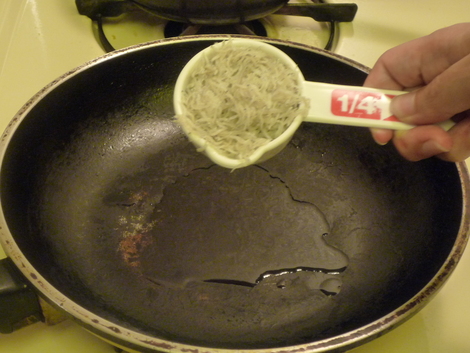 Toast the shirasu until they are starting to get golden brown and they start to pop in the pan. 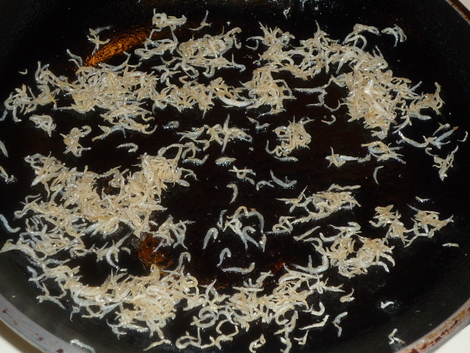 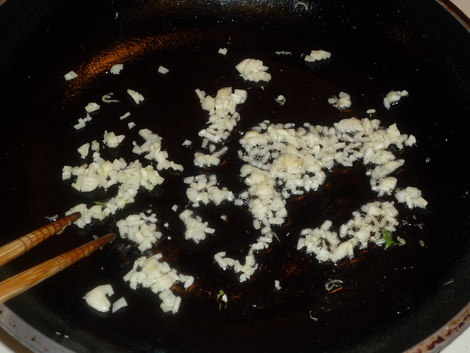 Add the pasta and then the shirasu, salt, pepper, kombu cha and pasta water. 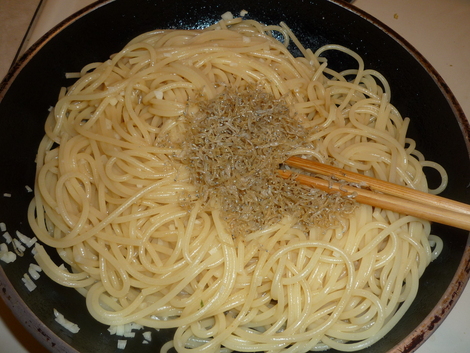 Wafū Pasta 2 served and ready to be eatten. 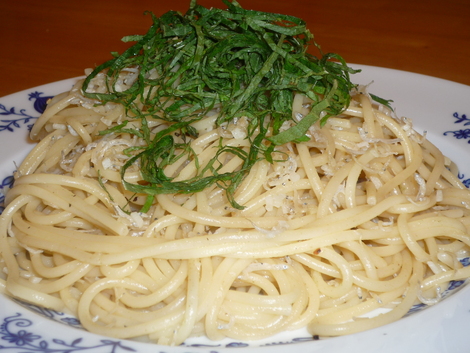 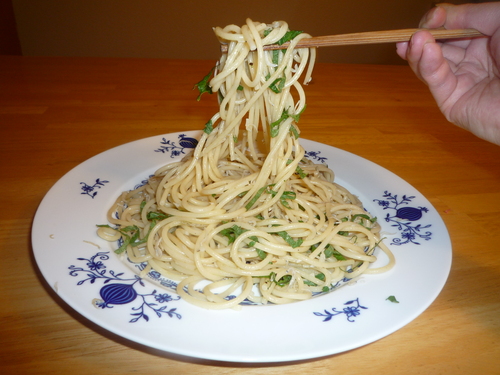 tags: Shiso  Garlic  Shirasu  Spaghetti  Wafu
You know, I just made a very similar recipe few days ago, it was also wafu-pasta with fresh shiso.I liked it very much!The fresh shiso was the "clue". I used some mentaiko but this wasn't really a good one, it is difficult to get in Germany.It was some kind of fake stuff, I think... Thank you for the recipe, it will be interesting for German readers.
— Amatō/Wagashi Maniac, August 28th, 2010
Thanks Amato! I'm glad you like it. Good mentaiko is hard to find even in California, plus it's expensive. Shirasu is a good alternative and has a lot of flavor. I'll continue to post more Wafu pasta recipes.
— Umamitopia, August 29th, 2010
This would be great, if you post some other recipes,thank you! this kind of pasta isn't well known in Germany, interesting, because it seems to be popular in the US. I made yesterday your saba no shio yaki....left a comment on your post ;-).It was heavenly, I really, really like your recipes, they are very accurate, and tasty. Now I`m hungry again... I think, I will cook your pasta recipe, but with small shrimp.I can't get these small tiny fish either.
— Amatō/Wagashi Maniac, August 29th, 2010
I'm glad you liked it. Yes, I think little shrimp, particularly the dried ones, have a lot of flavor and would also be very good. I hope that turns out well. I'm not sure if you can get your hands on dried scallops but you can soak those in water and breaks them up and add them into pasta as well. If I come up with a good recipe, I'll be sure to post it.
— Umamitopia, August 29th, 2010