Yamaimo/Nagaimo/Tororoimo is a type of yam that can be eaten raw and is used frequently in Japanese cooking. Why the multiple names? This confused me when I was a child because my grandmother always called it Tororoimo but my mom would mix it up and call it Nagaimo and Tororoimo. And to make matters worse, I would see it labeled as Yamaimo and Nagaimo in the grocery stores. WTF right? Until recently, I thought they were all the same thing and I didn't question why it had multiple names. It appears that Nagaimo and Yamaimo are different and even have a different number of chromosomes. It also appears that because they are similar, most retail stores and people often confuse them. I did a little research and I'm still not 100% clear on the differences between the varieties. (The information out there is very conflicting.) After speaking to family members and reading Japanese websites this is what I found: Nagaimo （長芋）is the variety that is commonly found in the grocery stores which has a tan colored skin and is a little less starchy and gooey compared to the other varieties. Yamaimo/Yamanoimo (Jinennjyo) （山の芋 自然薯） is characterized by it's dark blackish brown skin. It also has a higher starch content making it even gooier that nagaimo and is slightly sweeter. Interestingly my grandmother said that you could only find the dark variety in Japan when she was a child, however today the tan colored one is the one that is widely available. For the sake of simplicity, I will refer to it as Nagaimo from now on since it appears that it's the variety that is commonly sold in the stores (at least in Japan and in Japanese grocery stores in the US). One last thing, there is also a variety called Teimo, which is also similar in taste and texture to Yamaimo (Jinennjyo) because it's slightly sweeter and stickier than Nagaimo but it is short and stumpy and is often shaped like a hand, hence the name Te (hand) imo (potato).

Nagaimo can be eaten raw and cooked, but for those of you who are a little shy when it comes to slimy ooey gooey stuff, you might want to ease yourself into it by trying a recipe where it's cooked. When it's used as an ingredient where it's cooked, I find that it often acts as a natural baking soda and helps the food rise and become fluffy. I first introduced okra as a somewhat slimy ingredient that will help you ease your way into the wonderful world of slimy but Nagaimo is great too.

When you grate the Nagaimo, make sure that you do it quickly. If you take your time, you might find that your hand is itchy later. If you have sensitive skin, you might even want to wear gloves when handling it. I usually do it quickly and wash my hands immediately after and it's fine. Yamaimo (Jinennjyo) and Teimo are thicker and tend to affect sensitive skin more.

Nagaimo comes cut in pieces like this and the ends are dusted with...what is that? Wood flakes? Anyway it's dusted with something so it doesn't oxidize. 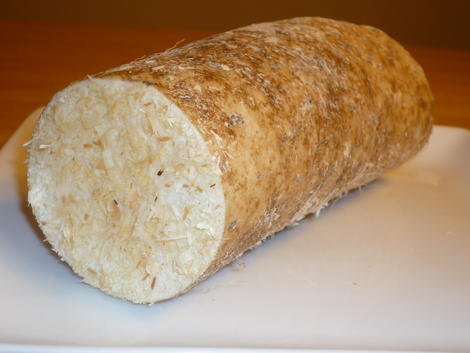 Nagaimo is a bright white color inside. All the varieties are white inside.

The skin is peeled off and it's grated to be used in countless ways. (Nagaimo) 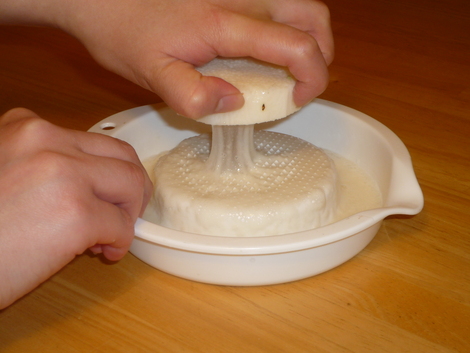 After I wrote this post, I spotted the dark variety which looks to be Yamaimo in a Chinese grocery store so I had to but a piece and post a photo. 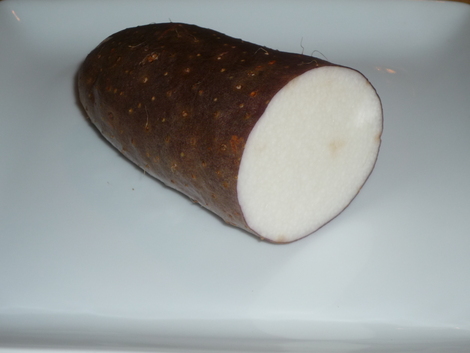 tags: Nagaimo  Yamaimo
Fantastic, thank you so much! I'm also very confused - there are also other yam kinds from Africa(even purple ones), are these used in Japanese cuisine?This kind is very huge, more like potatoes and not gooey. I think, I know which kind it is, with dark skin and shaped like a hand, I have somewhere a picture of this kind, from a Japanese site.I always though, it is the same like African yam.I tried to use it, to make some yam wagashi, but it didn't work, and the taste wasn't really good, it was strange. So, it looks like I need only one yam kind for wagashi- you see, your information is very helpful for me. Thank you!
— Amatō/Wagashi Maniac, September 11th, 2010
It is very confusing. I am still trying to get it straight. I spotted this dark variety today so I promptly purchased it so I can post a photo. It's slightly stickier than the tan color but they are very similar. I think you could use either for wagashi but I have never used it in wagashi. As for the purple yam, I have never seen it before in a Japanese grocery store although I know there are farmers in the country side that grow it and use it to make things like purple potato salad. I will keep researching this topic.
— Umamitopia, September 13th, 2010