Ingredient in the Spotlight: Hakusai

Hakusai is also know as napa cabbage or Chinese cabbage. The kanji for hasusai is white and vegetable. This is because the meaty part of the leaf is mostly white. It has a nice crunchy and refreshing light taste that goes with almost anything. In Japanese cuisine, it's commonly used in nabe (hot pot) dishes, tsukemono (pickles) or in stir frys.

It was introduced to Japan after the Meiji Period (1868-1912) and mostly during the Showa Period (1926-1989). It became popular very quickly and by 1941 over 500,000 tons of hakusai was produced. Production peeked in 1968 at 1,680,000 tons. Production decreased significantly with the introduction of Western food, however it continues to be very popular coming in third after daikon and cabbage.

Hakusai comes in many varieties and sizes. 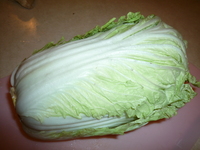