Ingredient in the Spotlight: Komatsuna

Komatsuna! Komatsuna! I think it's such a cute name. "Little pine vegetable." Until the Edo Period, it used to be called "Kasaina" but I think komatsuna is cuter. According to the Japanese Wikipedia site, it was named Komatsuna because Shogun Tokugawa Yoshimune was given it as a gift near Komatsu River while he was hunting.*

Komatsuna is one of my new favorite vegetables. It's new because I only recently started cooking with it. It's one of those vegetables that I always ate at restaurants or at peoples houses but never really ventured to cook with it on my own. I found out that it's really versatile and I liken it to a sturdier version of spinach. It is also known as Japanese Mustard Spinach, although I don't know why they call certain greens mustard greens when they taste nothing like mustard. It has a mild flavor and can be used in just about anything. I like using it in pastas, soups, salads, stir-fry dishes, omelettes...you name it. 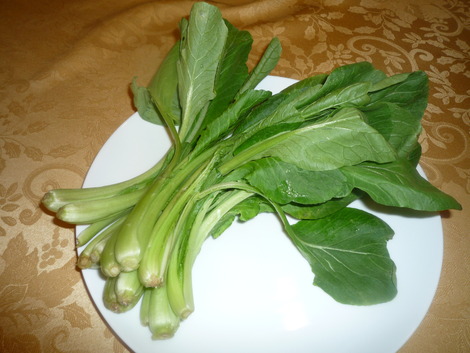