This is the conclusion recipe for the second build-a-meal.

Nikujyaga is the Japanese version of meat and potatoes. It reminds me of a hearty home cooked dish that deserves a weekly appearance at the dinner table. You know, like meat loaf Fridays.

Nikujyaga is often prepared with beef and potatoes but I didn't have any thinly cut slices of beef so I used the rest of my sukiyaki styled pork that I had left over from my shogayaki.

Ingredients
150 grams of thinly sliced beef or pork.
300 grams or 4 medium side red potatoes. (You can use any type of potato)*
1/2 a large onion
1 teaspoon of vegetable oil

1) Combine the ingredients for the sauce and set aside.
2) Lay out your thinly sliced meat on a plate while the pot is heating up. When the pot is hot, add the oil and put in the meat one slice at a time so the meat doesn't all stick together.
3) When the meat isn't pink anymore, add onions and potatoes.
4) Stir fry for 2-3 minutes until the onions and the potatoes have a chance to cook a little.
5) Add the sauce, stir so that everything is coated in the sauce and cover but leave the lid ajar to let the steam escape. Cook on low and occasionally give it a stir as the sauce reduces. Cook until the sauce reduces by at least half but not so much that the potatoes have crumbled.

Tips:
When the potatoes start to soften, don't use a spoon to mix everything because the potatoes can fall apart unless you're using red potatoes of yukon potatoes. Use the handle and give them a flip inside the pot.

Variations: Beef is commonly used for this dish but pork is also really good. You can also add shirataki (konnyaku noodles), carrots, gobo or other vegetables to this dish.

*After you chop up the potatoes, make sure to put them in a bowl of water. This will keep them from becoming brown. Also, don't cut the potatoes too small. You want this to be a hearty dish.

Place potatoes in water as you chop them up. 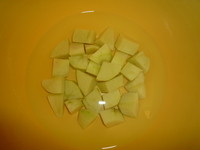 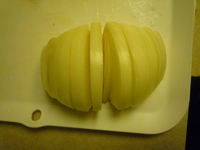 Lay out the meat so it's easy to put into the pot quickly. Add it in one slice at a time so the meat doesn't stick together. 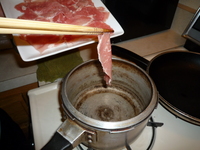 Cook until the pink is gone. 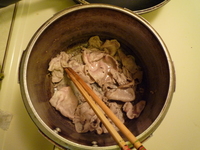 Add the onions and potatoes. Cook for 2-3 minutes and add the sauce. 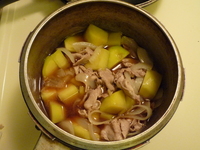 I ended up getting seconds because this bowl was too small. 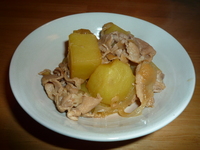 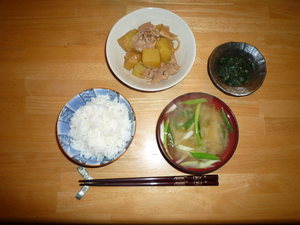