Vegetable ae (ah-eh) dishes are common in Japanese cuisine. See Creamy Zesty Lemon Broccoli Ae and Beet leaf Peanut Miso Ae. Both of these are not very traditional Japanese ae dishes but Ingen no goma-miso ae is one that pops up in my mind as a classic vegetable ae dish. Whenever my mom and I made goma miso, I remember fighting with her over the left over goma-miso sauce. There's always a little bit of goma-miso that gets stuck in the crevices of the suribachi (Japanese mortar) and if you put some rice in, you can mix it up and make goma-miso rice. However, there was usually only enough left for one small bowl of rice. Dude it's sooo good.

Speaking of goma-miso, I thought I would share a children's song that mentions goma-miso. The song isn't about goma-miso, in fact the lyrics hardly make sense unless you understand the time and setting in which this song takes place.

The translation is a direct translation and doesn't fully convey the meaning of the song. From my understanding a group of samurai (Ochatsubo Douchuu) are delivering freshly harvested tea to the shogun. On their way, they would pass through villages. Commoners were fearful of samurai because if they even looked at them the wrong way they could be killed. Therefore, as the samurai approached the village, people would run inside their homes and close their sliding wooden doors which made the toppinshann noise until the samurai passed through their village. Don doko sho is a sound effect of moving only after they are gone.

While inside, it is so quiet that you can hear the mice squeaking as they eat rice in the rice caskets. Even if your mother or father calls for you, you wouldn't dare answer them. (Meaning while the ochatsubo douchuu are passing.) Who broke the rice bowl by the well? (Presumably this is while everyone was hiding inside.)

I found a website that has the music for the song.
Zui Zui Zukkorobashi Music

1) Toast your sesame seeds in a hot frying pan. When the seeds start to puff up and pop, they are done. You can also use toasted sesame seeds but toasting your own makes a big difference. Set a side a few for garnish.
2) Put toasted sesame seeds into a mortar and grind until they are finely ground.
3) Combine the rest of the sauce ingredients (miso, sugar and hot water) and mix until smooth.
4) Boil hot water and add the green beans to the pot. Boil for 2-3 minutes.
5) Drain and cool in cold water.
6) Cut green beans into inch long pieces and spin in a salad spinner or pat dry.
7) Mix in with goma-miso sauce.
8) Sprinkle with a few whole sesame seeds.

Sesame seeds go into the suribachi. Grind until finely ground. 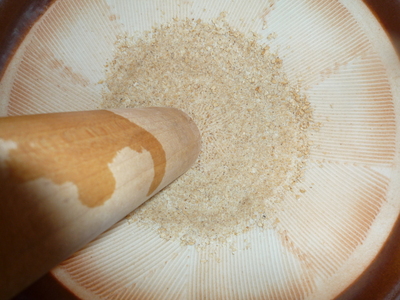 Add the rest of the sauce ingredients. The sauce should be thick. 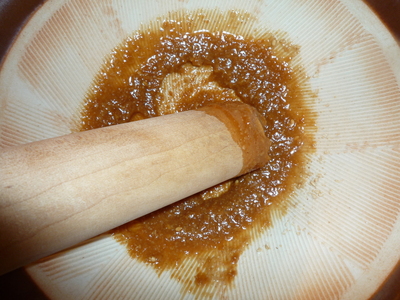 Wash and pull off the ends of the green beans. 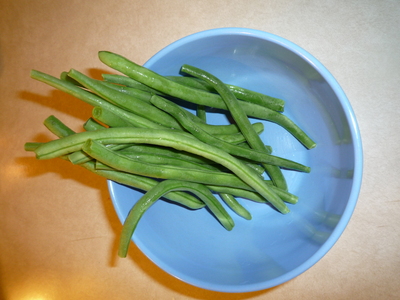 Boil the green beans, cool and cut up into inch long pieces. 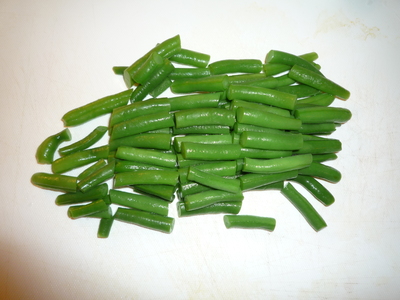 Mix in the suribachi 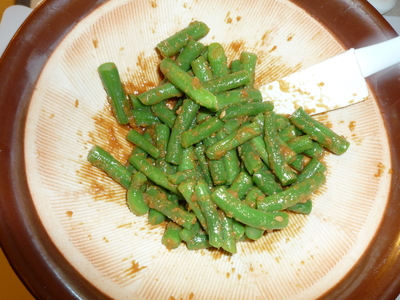 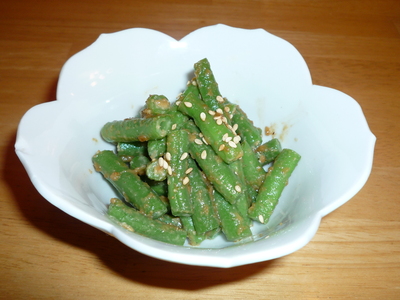