There is also a simulated version of kamado (traditional earthen pot) rice. mmm...

Japanese rice is the staple of Japanese food. It has been intertwined in the culture and is deeply connected to the Japanese people. Many songs and dances have been written about harvesting and planting rice. The government continues to heavily subsidize Japanese rice farmers (although this may change), and so on and so on.

I am American, but I was somehow accused of being nationalistic (on the Japanese side) because I argued that there was a difference. If you have grown up eating a particular grade of rice with almost every meal and have been exposed to premium and lower grades of rice, you can taste a difference in different types of rice. My father’s side comes from a long line of rice farmers from Niigata prefectures, which is known for their rice and sake. My knowledge and appreciation for rice comes from my father who has never taught me to cook a single dish, but can give a long lecture on the various types of rice and the differences in flavor, texture and smell. In my experience, Japanese men seem to be more particular about their rice than women although I could be wrong. Maybe I think that because men seem to consider rice as the most important part of the meal.

Japanese rice can make or break the meal. After all, rice (gohan in Japanese) literally means meal. It is also sometimes referred to as meshi, which also means meal.

Ingredients
2 + (1/4) cups of Rice (I prefer Nishiki if you’re in the United States.)
Filtered Water (add until the water comes up to the 3 along with the rice in the pot that comes with the rice cooker)
Tap water used only for rinsing.

Place rice into a colander and colander into water for a rinse. 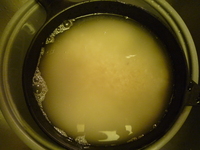 2) Drain the water out, add tap water and start scrubbing the rice. Move your hand in a circular motion and when you come full circle, push the rice grains against each other as if you are scrubbing them but in one direction. 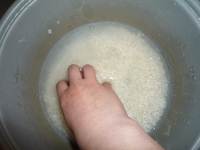 3) Repeat for about 10-20 times. Do this quickly.
4) Rinse the rice and start over. (2 times)
5) Some recipes will say to wash until the water runs clear but this isn’t necessary if you get the “musen” rice which is pre-washed. Just wash enough to polish the rice.
6) Drain the water by passing it through a sieve or put it back in the colander and put it back into the rice bowl.
7) Add filtered water. Good water is the best way to enhance the flavor of the rice and allows the natural sweetness of the rice to come through. Fill until the water comes up to 3. 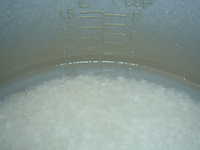 8) Soak in the water for a minimum of 15 minutes although most other people will say that it should soak for at least 30 minutes to an hour. The longer the better, as a general rule of thumb, but if you’re pressed for time then 15 minutes will do. Also, note that in the winter or in cold environments, you’ll want to soak it for longer, and in hot environments, soaking times should be monitored more closely. Don’t allow the rice to soak in humid environments overnight because the rice can go bad.
9) After soaking, put the rice in the rice cooker and hit the switch. If you have a fancier rice cooker with many functions the you can set it to regular white rice.
10) When the rice cooker is done, allow the rice to steam in the rice cooker for an additional 10 minutes. Give the rice a quick stir without smashing the rice. If you have a fancy rice cooker this extra steaming time may be built into the cooking time. 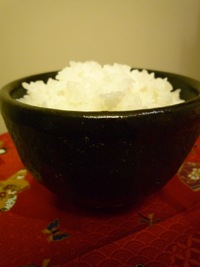