Ahhh hijiki. I've sort of had a love hate relationship with hijiki most of my life. It probably started in the 6th grade when I brought hijiki gohan (hijiki rice) to school and the other kids pointed, scrunched their faces and said "ewww" when they saw what I was eating. One kid said I was eating worms and another kid said they were bugs. At first, I tried to reason with the kids and attempted to explain that I was eating seaweed but I think that only made it worse. I was horrified at the response I was getting and quickly packed up my bentobako (Japanese lunch box) and starved the rest of the day. I vowed never to take it to school again. My grandmother and grandfather were visiting and my grandmother put a lot of love into my lunch by getting up early in the morning to make it for me. I felt bad that I hardly touched it for lunch but I ate it as soon as I got home. I told her that she could make it for dinner but I wasn't going to take it to school ever again.

I would like to say that in my adult life I'm no longer afraid to take hijiki to work for lunch but that would be a lie. There are some "weird" Japanese things that I feel more comfortable eating in the comfort of my own home or only around people who are familiar with Japanese food. Unfortunately, I don't think adults are that much better than kids when it comes to unfamiliar foods. Just last week, I had a co-worker ask me questions about what I was eating which was accompanied by a strange look. She's a nice person and I wasn't offended but I guess sometimes I just want to eat in peace. And by eating in peace, I mean eating without getting disgusted looks. I don't mind, however, getting questions from people that are curious about food and are interested in what I'm eating. Usually, most people are just curious but, I will get at least one person who gives me a disgusted look.

Thinking about my early experiences with hijiki has forced me to think about how I have made my lunch decisions. I find that sometimes I will avoid taking leftovers for lunch if it includes ingredients such as hijiki and I'll opt for a good old American sandwich because no one will question my lunch choice. I can eat my sandwich in peace and no one will question how American I am. I realize that I sound a little paranoid writing this but I know there must be other people out there that understands what it is to be a secret eater.

On the flip side, when I was living in Japan, I found that I couldn't drink a coke and eat a classic PB&J without ridicule. I would often get told that A: I drink too much soda like all Americans and B: where's the rice in my lunch? By the way, a PB&J sandwich is the most alien sandwich to Japanese people. I thought it was the most normal sandwich I could think of but I freaked out a co-worker just talking about it one day.

And so it is with great pleasure or great fear that I introduce hijiki as an ingredient that has giving me pleasure and grief over the years. It's a healthy and versatile ingredient and I hope it becomes more popular outside Japan.

Hijiki is dried and sold in packages. 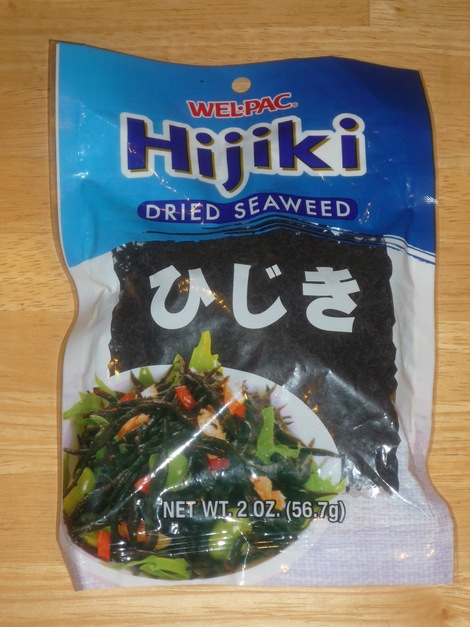 Hijiki looks like long skinny pieces of wakame twisted up. 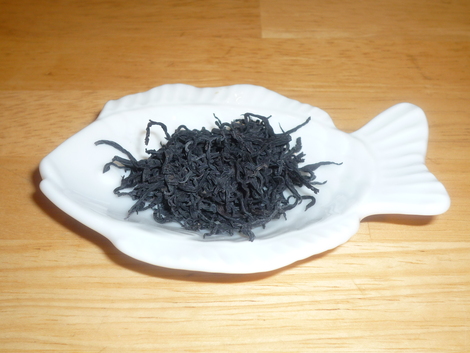 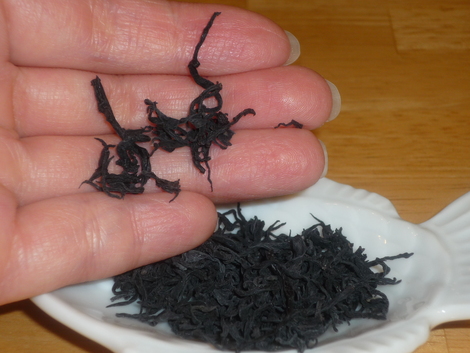 Soak in water for about 30 minutes. 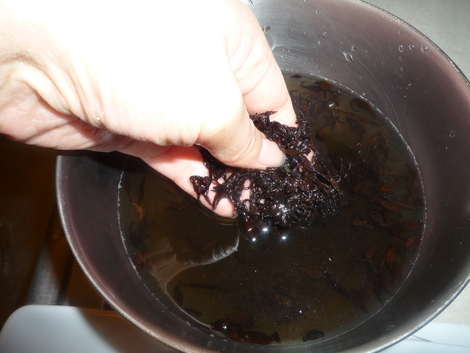 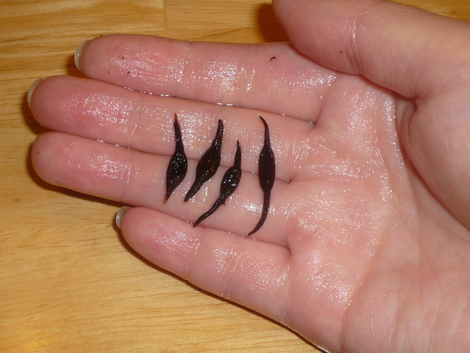 HA! The Beastie Boys have a song called Freaky Hijiki. It's a nice song. Not freaky at all. You Tube
tags: Hijiki
The joys of eating non-"American" food at home. I was never brave enough to bring hijiki to school.
— Vivian, October 24th, 2010
I guess I didn't know what I was getting myself into. At least it's a plant. I usually point out to adults that eating hijiki is at least cleaner than eating a pig. :)
— Umamitopia, October 28th, 2010