Ingredient in the Spotlight: Katsuobushi

I probably should have posted katsuobushi a long time ago but for whatever reason I haven't. Recently, I acquired a large 500 gram bag of katsuobushi from a Japanese Costco (Costco is a large international wholesale retailer) and I wanted to share a photo on my blog. It also occurred to me that I haven't discussed the various types of katsuobushi so I thought this was the perfect opportunity for me to talk about the different types of katsuobushi.

Katsuobushi is dried bonito that is shaved into flakes and is used frequently in Japanese cooking. Most often it is used to make dashijiru (fish stock) which is then used in countless Japanese recipes. The flakes themselves are also used as toppings or mixed with vegetables or other proteins because of it's robust fish flavor. Most of the time I use it to make dashi and I occasionally mix it in with tsukemono and vegetables to add a burst of flavor. Oh and I can't forget ume-katsuo. It's also a must have as a topping for okonomiyaki. I love topping hot food with it because the heat from the food make the little shavings dance. I have been amused by the katsuobushi dance ever since I was a kid. What can I say?

As widely used as katsuobushi is, the traditional whole dried katsuo have virtually disappeared. Traditionally, dried katsuo was shaved by hand as needed and the rest was stored for later use. When I was a child, you used to be able to get them at the department stores quite readily but as of about 20 years ago, they have become difficult to find. I noticed that the quality of the katsuobushi started to diminish and the shavings wouldn't curl up. Instead they only produced katsuo dust. My grandmother has a katsuobushi kezuri box that is essentially a wooden box with a drawer and you hand shave the katsuo on a blade that sits on top of the box. The shavings fall into the drawer and you open the drawer to pull out the shavings.

Fresh kezurikatsuo is soooo delicious and such a stark difference from packaged katsuobushi that it makes me sad that hand shaved katsuo has died out. When I think of kezurikatsuo, I'm reminded of Pavlov's dog. The sound that dried katsuo makes when it's being shaved is so distinct that anyone who has heard it once immediately knows what they are hearing. It's the sound of flavor. Whenever my grandmother started shaving the katsuo, my cat and my grandmother's dog would run from wherever they were to the kitchen and sit politely (without begging) by her side until she finished shaving the katsuo. It was a funny sight. They never fought over it and waited until they were both served. I guess it was because they feared never being served again. It was also the sure fire way to get my cat to come home when she was hiding out in the neighbor's backyard.

Katsuobushi is packed in different sizes. There are also individual sized katsuobushi packets not pictured here. 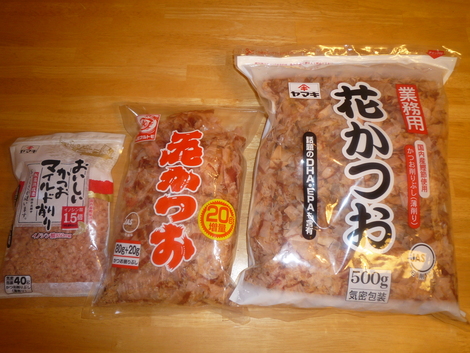 Here's a giant 500g bag from a Japanese Costco. 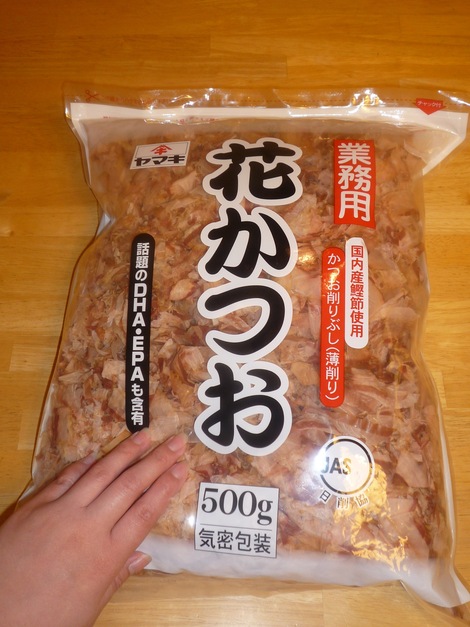 Katsuobush is available in large and small flakes. 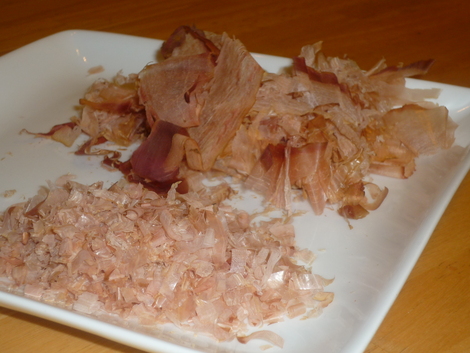 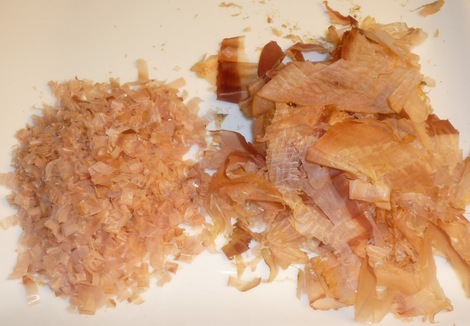 tags: Katsuobushi
Thanks for this great article about Katsuobushi - it is very informative. Pre-packed katsuoboshi flakes are very convenient but I prefer making my own ones from whole Katsuobushi. I also believe that the fresh ones have a more intense flavor, but it is not easy to get whole katsuobushi outside of Japan. Here is a site with worldwide shipping of whole Katsuobushi http://www.ANYTHING-FROM-JAPAN.COM/Katsuobushi-Block-p/9.htm
— Nicolas, August 16th, 2012