I know...I know it's been a year since I posted. How lame is that? I could run the gauntlet with excuses but why bother? I even neglected it for so long that I didn't realize my blog went offline for a month due to some technical issues. Excuses aside, I'm just going to jump back in. I decided to bring my blog back with something that I know not too many people know about. Mizuame is a unique ingredient because of it's subtle sweetness and smooth texture. It's also an ingredient that's near and dear to my heart so I'm bringin' it back with Mizuame!

Mizuame is a thick syrup-like sweetener made from barley and other starches which is converted into sugar. When I think of mizuame, I'm reminded of my childhood and my grandfather. When I was a kid my mom would dip the ends of two chopsticks into a jar of mizuame and hand them to me with a gooey glob of mizuame on the ends. From there I would take over and spin the tips of the chopsticks around eachother over and over until the mizuame became frothy in texture. The excitment and joy of eating mizuame on a stick was so much better than anything else on a stick (ice cream and lolliepops included) because not only was it melt in your mouth delicious, I worked hard for it.

It's been a while since I had mizuame like that. Maybe kids are the only ones that eat mizuame like that, however there are other uses for mizuame. It can be used in place of sugar in sweets to make them thick and shiny.

I'm also reminded of my grandfather who was sent to protect the Japanese Imperial Palace during the war. The Imperial Palace was never attacked, however many of the stores and homes near the palace were bombed. On his way home he found cans of mizuame (apparently they were in cans back then) in the rubble of one store and brought them home to my grandmother to use as a sweetener. To this day, my grandmother is the only person I know who uses mizuame.

Mizuame in Action
This YouTube Video shows a kid going to town with her large glob of mizuame. Man, my mom never gave me that much.

I decided to search for mizuame at my local Japanese grocery store and was pleasantly surprised to find a variety of different types. There was a higher grade mizuame in a jar and this smaller, more practical mizuame in a tube. 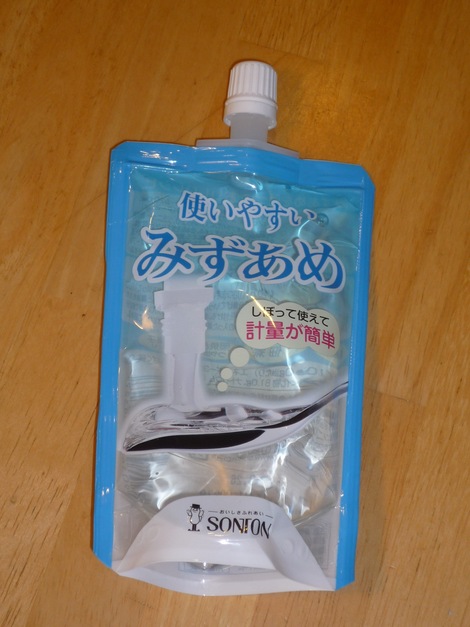 I'll be using this mizuame in a dessert this weekend so stay tuned.
tags: mizuame
It's so nice to see your blogs not only back but updated! Yay!
— Anonymous, May 14th, 2012
Thanks! I'm going to try to post more regularly.
— Umamitopia, May 21st, 2012
Yay, welcome back ! >< I was sad when your blog seemed to be down ! I'm always hearing about mizuame, but never tried, cause I don't know what to do with it. Thanks for the link, next time I'll try it like that ^v^.
— Anonyme, May 31st, 2012