Anyone know Omocha no cha cha cha? It’s a children’s song that just popped into my head as I was thinking about kabocha. Kabocha is a cute vegetable. It's round and bright orange on the inside. Who wouldn't like it?

Kabocha is a very versatile squash/pumpkin. I’m not really sure if I should call it a pumpkin or squash but kabocha translates to both so I’m just going to call it a pumpkin from now on. It can be used in many sweet or savory dishes such as soups, salads, breads or pies. I introduced it in the first miso soup recipe but today I’m going to introduce it in the first okazu (side dish) recipe.


*You can also substitute salt and koikuchi shoyu with 1 teaspoon of usukuchi shoyu. (See Different Types of Shoyu (Soy Sauce). If you use koikuchi, you want to use a little as possible to preserve the natural color of the kabocha.

1) Cut and wash kabocha. Be sure to use a sharp knife and be very careful when cutting kabocha because it is very hard and difficult to cut.
2) Mix the sauce ingredients and add to a pot.
3) Add the kabocha to the pot and cook for 2 minutes, stirring constantly. Most of the sauce should evaporate.
4) Transfer into a glass bowl and cover tightly with plastic wrap and microwave on high for 2 minutes. Microwave strengths vary so you may want to test your microwave by microwaving for 1.5 minutes first. Don’t remove the plastic but look through the plastic to see if it looks done and if not, microwave another 30 seconds to a minute.
5) Let stand in covered bowl for 1 minute but don't steam for too long or it can get mushy.

The kabocha should be hoka hoka and have a consistency similar to chestnuts. If you prefer your kabocha to have a wetter consistency, add more of the sauce and finish in the pot.

Combine the sauce and kabocha in the pot and simmer until most of the sauce has evaporated but be careful not to burn the sauce. 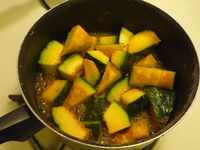 Transfer to a microwavable bowl and cover with plastic. 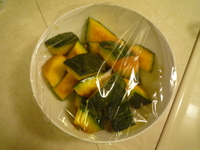 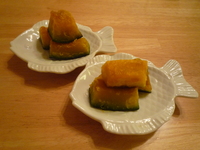