Ingredient in the Spotlight: Ginnan

Ginnan are nut-like seeds from the ginkgo (full name Ginkgo Biloba) tree. The fruit part of the ginkgo contains butanoic acid (also known as butyric acid) and has a terrible smell when it falls off the tree. The gingko seed or ginnan in Japanese is protected by a hard shell and also has a paper thin lining inside.

Ginnan are used commonly in Chinese cuisine and don't make a huge appearance in Japanese cuisine, although it's not uncommon. Occasionally, I'll see it used in kaiseki ryori (traditional Japanese multi-course meal). A proper chawan mushi (a soupy egg dish) always has a few ginnan inside.

Aside from the health benefits, I'm not sure why ginnan seem to be prized little seeds. It's not crunchy like a nut, doesn't taste good raw and doesn't seem to have a distinct flavor.

I don't know, maybe I just don't get them. Regardless, I feel like I have to have them in my chawan mushi which I'll post later this week.

Every year in Osaka, there is a ginnan otoshi event where people can come and pick up the ginkgo fruit that have fallen from the ginkgo trees along Midosuji Boulevard. On the news I have seen people stomp on the fruit to pull out the shells and hoard them in plastic bags. Some people even take umbrellas and flip them over to catch the fruit as they fall off the trees. Everyone looks so happy but they have a horrid look on their face from the smell. Although I have never taken part in these events, it seems like something worth going to.
I found a blog that has some pictures of the event.
Osaka Deep Annai

Gingko trees have beautiful fan shaped leaves that turn a bright yellow in the fall. I took a photo of this gingko tree when I went on a Kokkai Gijidou (National Diet Building) tour last fall. 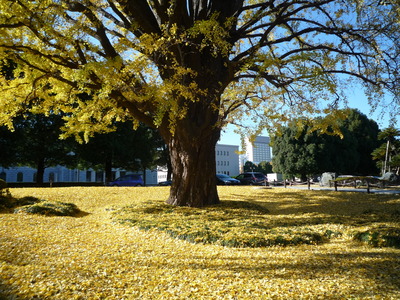 Ginnan are available canned or you can buy them raw in the shell. 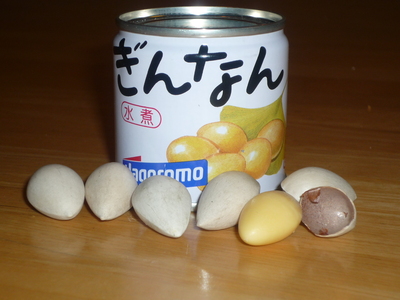 The shell is thin compared to walnuts or almonds. Use a nut cracker or even a garlic press and give it a light crack. 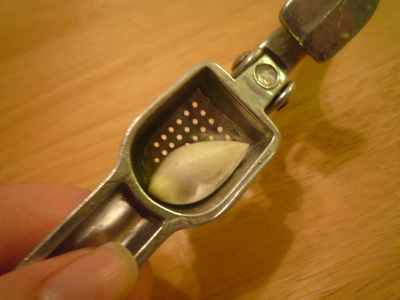 Ginnan has a thin skin between the shell and the nut. 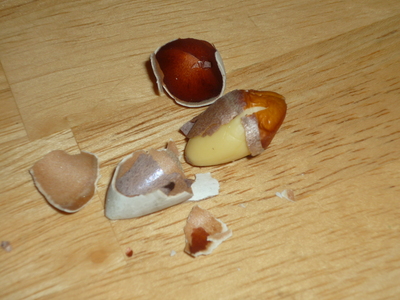 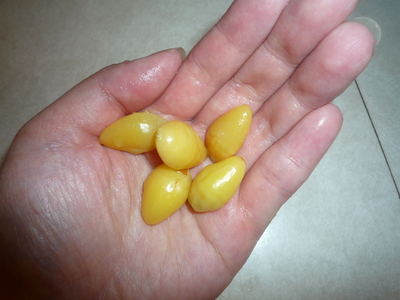