Ingredient in the Spotlight: Satsumaimo

I equate yaki imo with ice cream trucks. Around the same time when beautiful burgundy colored satsumaimo start making their fall appearance in grocery stores, you'll find little food trucks driving around with a large speaker attached yelling "Yaki imo~ Yaki imo~ Yaki imo~." Yaki imo are actually quite the opposite of ice cream because they are a pipping hot snack and more of a fall/winter time delight. However, like Pavlov's dogs, when I hear "yaki imo~" I have the sensation to grab my wallet and run out the door. Satsumaimo are naturally sweet and the flesh has a rich creamy quality to it. All you need is a little dab of salt and a little pad of butter and it's the prefect snack food. (This is a little off topic but when I took a cultural anthropology class, I learned about a culture that prized their sweet potatoes/yams and measured their wealth on how many sweet potatoes/yams they had. I don't remember anything else about this culture but I could relate to their love for sweet potatoes, well if they were anything like satsumaimo.)

Satsumaimo have a bright burgundy skin. 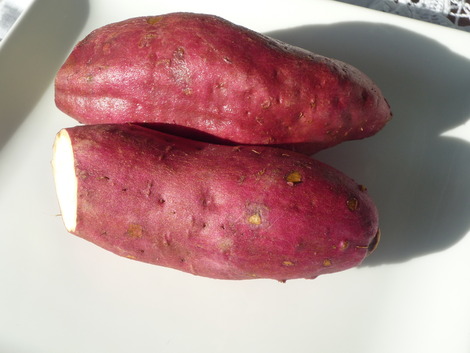 Inside they are a pale yellow which turns a little brighter when cooked. 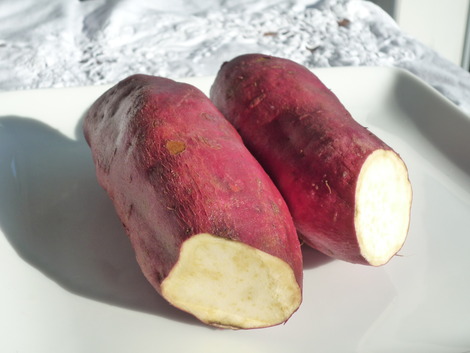