I am going to start with a basic recipe which will serve as one of the main recipes that I refer back to over and over again. By itself, it's not the most delicious thing to eat, but is a necessary component of Japanese cooking so please bare with me as I explain.

Fish/vegetarian stock (dashijiru or dashi) in Japanese cooking is essential. I don't know how strongly I should emphasize this but it's like Korean food and red chili, Indian food and garam masala, Thai and basil or coconut. Of course you don't need it in every Japanese dish you make, but it's really the essence of Japanese food. I know of a few vegetarians living in Japan that gave up on trying to be vegetarian while living in Japan because dashi is used in just about every thing. Many soups, cooked vegetables, sauces, tamago (egg), use it as a base to add flavor to the dish. Even if it looks vegetarian, more than likely it's not.

My grandmother often jokes that "a man who was said to love fish more than anyone in the world, married a woman who was said to hate fish more than anyone in the world," referring to her and my grandfather. My grandmother is from Fukushima, an area that isn't know for fresh fish or even fish dishes other than migaki nishin (preserved herring). My grandfather, on the other hand, is from Hokkaido, which is said to have the best seafood in Japan.

Dreading the idea of cooking fish for every meal, it was months before my grandmother figured out the secret to satisfying my grandfather's discriminating taste buds. It was DASHI! She figured out that everything would taste "umai" (good) as long as there was dashi in it. It was also a way for her to cook with more vegetables and satisfy my fish loving grandfather. Now that I think I've beat that point to a pulp, which is that everything is yummy with dashi, I will go on to how to make it. Dashi, of course uses 2 key ingredients to create umami.

I am posting two types of dashijiru: Ichibandashi and Nibandashi. Ichiban dashi is used for clear Japanese soup which is usually served with sashimi or sushi. You can also use it as a base (think of it as any kind of stock) to flavor countless Japanese dishes. This is why I'm posting this recipe as the first of my Japanese recipes.

Nibandashi is used for dishes that could use extra flavor but isn't going to be used as the star of the dish. I usually use nibandashi in recipes such as miso soup. Miso soup has miso, which is a very salty and strong ingredient so nibandashi is perfect for miso soup.


1) Place kombu into the measured water for 20-30 minutes before cooking so that it has time to soak and release its kombu flavor into the water.
2) On low to medium heat, boil the water and take out the kombu right before it starts to boil. You want it to slowly boil so that the kombu will have time to release it's flavors but you don't want to boil it because you don't want the kombu flavor to be too strong. (It sounds crazy but bare with me).
3) Add the katsuobushi and turn off the stove.
4) Allow the katsuobushi to remain in pot until cool.
5) Drain ingredients with a cheese cloth or clean gauze although don't squeeze out all the dashijiru from the katsuobushi. You'll squeeze out every last bit when you make the Nibandashi (2nd broth).

Look how much golden Kombu flavor comes out of the kombu.

Add in the katsuobushi and turn off the stove. This is important in preserving the favor of the fish.

Use a cheese cloth or cooking gauze and a sieve to drain broth. Wait until cool to allow all the katsuobushi flavors to come out into the water. 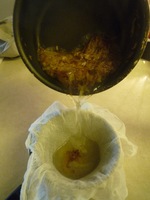 The broth should be a nice golden color.

1) Put the kombu and katsuobushi back into the pot and add 3 cups of water.
2) Bring to a boil and remove any impurities or aku from the broth. Aku is a bitter flavor that is released from fish, meats and vegetables during the boiling process.
3) Reduce heat and simmer for 3-4 minutes.
4) Wait until cool and drain into a cheese cloth and drain.
5) Now you can squeeze the heck out of the cheese cloth to get as much of the flavor as you can out of it.
6) At this point I usually toss the katsuobushi and save the kombu to make tsukudani. I usually wait until I have about 10 of these left over kombu pieces before I have enough to make tsukudani. I'll post that recipe later.


Combine water and left over katsuobush and kombu and simmer for a 3-4 minutes. 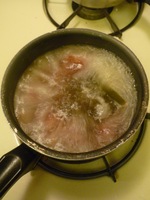 Allow broth to cool in pot and drain. 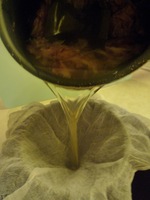 Nibandashi should also have a slightly lighter but still golden color.

Oh wait! I forgot to mention that I am posting a very basic dashijiru recipe but there are variations of dashijiru which can be made with a variety of ingredients. Other ingredients you can use are:

You can also just use the kombu, wakame and fummatsu kombu cha (powdered kombu powder) and make a vegetarian dashi.

Niboshi are often hard to find and a little on the expensive side so I usually just go with katsuobushi and kombu but some people want as much flavor as possible and will add niboshi to their dashijiru. My mom never made dashijiru without niboshi and had my grandmother send it to her on a regular basis, but oddly enough after she moved back to Japan, I hardly ever see her using niboshi in her fish stock anymore. It has a fishier flavor, as sardines do, but I think when they are dried the fishy flavor is enhanced. Either way I prefer katsuobushi and I'll usually put a little extra to make up for not putting niboshi.

*A side note about kombu: Don't wash it! The flavor is in the delicious white powder on the kombu. My grandmother told me that during the war, when food was scarce and fish and other foods were difficult to come by, it was not uncommon for people to scrape off the white powder and save it in jars to use as seasoning. I guess this was their substitute for Ajinomoto but regardless, it's where the flavor is so don't scrub it down like most packages suggest.

**A side note when buying katsuobushi: Katsuobushi, although is a common ingredient in Japanese cooking, is not an ingredient that goes flying off the shelves in Japanese markets in the US. This is evident in it's shelf placement since it always seems to be on the bottom or top shelf, and because I find it difficult to find fresh katsuobushi. If you're purchasing katsuobushi overseas, then you should always look at the expiration date and if you're ghetto like me, pull the bag from the back of the shelf to see that you're getting the one with the latest expiration date. You can also tell how fresh the katsuobushi is by looking at the color. Katsuobushi is usually placed in large plastic bags where you can see the product inside. It should be brown with a slightly pink hue and should not be dark brown. As Katsuobushi gets old, it will start to get sour and will make your broth sour. This will ruin your soup or whatever you're making so you're better off not using it at all if it's old.
tags: Dashijiru  Ichibandashi  Nibandashi  Kombu  Katsuobushi