Yakiniku （焼肉）is all about meat where the first kanji （焼） mean to fry or grill and the second kanji （肉）means meat. Most yakiniku places are for meat lovers since many of them are all-you-can eat restaurants and you usually cook the meat yourself at the table. Yakiniku is traditionally served by cooking bite-sized pieces of marinated beef on griddles or gridirons. It is typically served with grilled vegetables, kimchi and other sides, and dipped in a sauce called a tare (pronouced tah-reh) and eaten with rice. One of the more popular yakiniku tare brands is Ebara. Their commercials have a catchy jingle "Ebara Yakiniku no Tare," and somehow I always end up singing it when I make yakiniku but I don't think I've ever tried it. (Here's a Youtube video of one of their commercials. Japanese commercials are so weird. I love them.) I guess I haven't succumed to the powers of marketing...at least not concerning yakiniku sauces. Anyway, yakiniku tare is really easy to make yourself but I like to use the Korean BBQ ready made sauce and mix it with kojyujyan (spicy chili paste) for the marinade.

This style of yakiniku is adapted to a California/Korean style where I use a Korean sauces and colorful California bell peppers. I also like using more vegetables and less meat.

Directions
1) Marinate the yakiniku in the Korean BBQ sauce, 1 tsp. of the kochijyan and a little sesame seed oil if the BBQ sauce doesn't have enough. Let it marinate for at least 30 minutes but 1 hour is optimum. Tip: You don't want the meat to toughen up so I wouldn't marinate for much longer.
2) Cut up the onions into strips and stir fry them in the vegetable oil. Stir fry for approximately 2 minutes. (If you're using a large skillet like I am here, reserve the other half for the yakiniku.)
3) Add the bell peppers and continue to stir fry until the vegetables are soft (a few minutes) and add the sake and 1 tsp. of the kochijyan.
4) When the vegetables are almost done, add the yakiniku to the skillet and lightly fry on both sides.
5) Plate by serving a mountain of the bell peppers and onions and top it with the yakiniku.
6) Serve with rice, kimchee and some sort of clear soup. Dude this meat just melts in your mouth. A little goes a long way.


Check out that marbled beef. Fatty meat and fatty fish is considered delicious in Japan, particularly if it's marbled. This is a natural Angus prime beef. They are short rib boneless (Karubi) style beef which is popular for yakiniku. 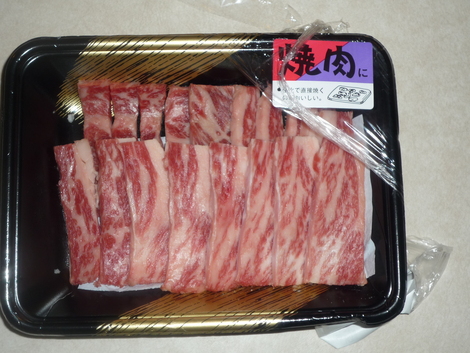 Lay a little vegetable oil into the skillet and add the onions and stir fry for 1-2 minutes. 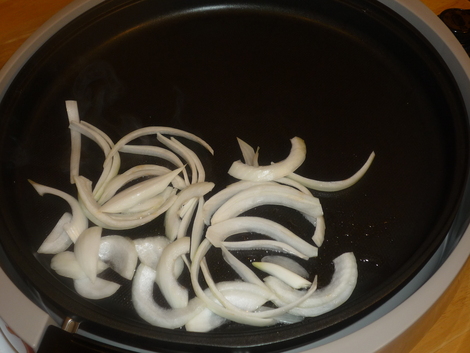 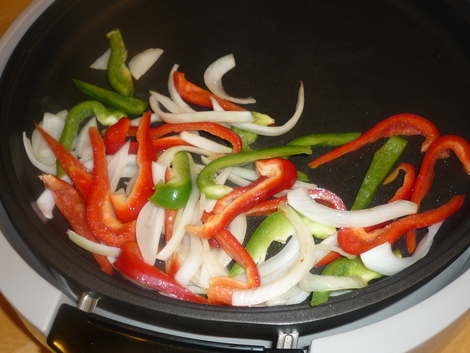 Save room on the other side of the skillet to grill the meat. 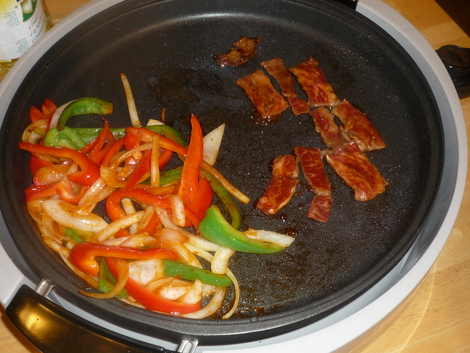 Lay the vegetables down first and place the meat on top. 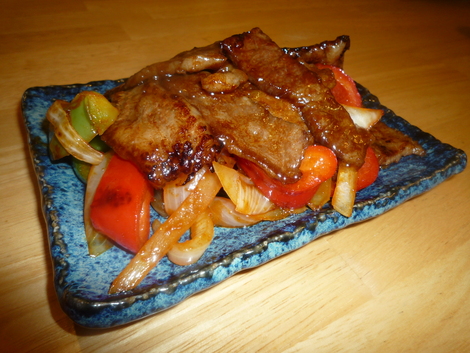 Ohhh if I could eat it again from the other side... 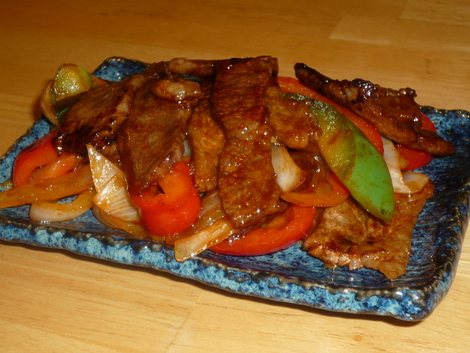