Not just tofu and green onions in my miso soup please

If you're new to Japanese cooking then one of the fist recipes I recommend to beginners is miso soup. People often ask me how to make miso soup and I always tell them it's just miso and fish stock and anything else you want to put in it. The hardest part is making the fish stock but it's a lot easier than vegetable stock, which requires lots of chopping and a sachet of herbs. It's also easier than chicken or beef stock which requires a long cooking time, not to mention, prepping the bones.

There are many variations of miso soup. When you go to a Japanese restaurant in America 99.9% of the time you'll get tofu and green onions. Don't get me wrong, I like tofu and green onion miso soup, but if you're having it 5 days a week, it starts to get boring. Today, I'm going to introduce one of my favorite miso soups: kabocha and tamanegi miso soup (Japanese pumpkin and onion).

You can get kabocha at many grocery stores these days, including large chain supermarkets such as Safeway (Kroger) stores. Most Chinese grocery stores will also carry it, although many times you'll have to buy a whole pumpkin, and if you're not used to cooking with it, you may end up chucking it. Eventually, I will post many recipes for kabocha since it's one of my favorite squashes but for now, if you have a Japanese grocery store nearby, I recommend getting it there since they will usually sell them cut in half. Please note that kabocha is very hard and difficult to cut so please be careful when cutting and use a sharp knife. The irony is that the harder it is the cut, the sweeter and more flavorful it is.

1) Make nibandashi or you can use ichibandashi. It's just kinda a waste to use the ichibandashi for miso soup. You can save the ichibandashi for something else and use the katsuobushi and kombu and boil it for the nibandashi.
2) Add the kabocha and onions and bring to a simmer. Cook until the onions and kabocha are soft. Get rid of the aku** if there is any.
3) Add the miso and put the miso in a ladle and use chopsticks or something to break up the miso before adding it directly to the soup, otherwise you'll end up mashing up the kabocha.

Simmering Kabocha and onions and removing aku with ladle. 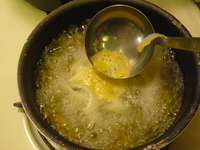 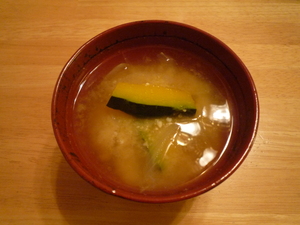 * You can substitute the fish stock with water and 1/4 teaspoon of hondashi or fummatsudashi, which is fish stock in a concentrated power form. It's similar to that of beef or chicken bouillon cubes and is salty and not very appetizing by itself but adds a lot of flavor to a dish and is a quick and easy substitute. There are health concerns associated with hondashi because it contains some MSG and many people don't like adding food additives, but I honestly don't think that it's that big of a deal if the rest of the ingredients are healthy. I think eating a greasy hamburger is a lot worse for you then a little hondashi. I think people are more afraid of MSG than they are of barbecue which often has burned pieces of meat that contain carcinogens which are cancer causing. The health debate on MSG is long and arduous so I'll stop there for now but I'm listing it as an alternative to dashijiru. I use it if I don't want to dilute the taste of the dish and want the flavor of umami to come out in the dish, or if I'm crunched for time. In the case of miso soup, making your own broth is the best way to go.

** Aku is a bitter flavor that is released from fish, meats and vegetables during the boiling process.