I wanted to introduce one of my favorite root vegetables Gobo or burdock root. It is commonly used in Japanese cuisine and used in Chinese herbal medicine. It even has roots in Europe during the Middle Ages.

It has a very earthy and sweet undertone and is served crunchy or cooked soft. It's commonly paired with carrots and other root vegetables and meat. It has a very bitter and harsh taste when raw, and is almost always cooked. Akunuki is commonly used as a technique to prevent it from developing a dark color when prepping. It is usually dropped into a big bowl of water with a teaspoon of vinegar to keep them white.

Check out this long gobo. 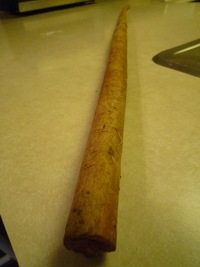 It was so long that it was cut in half. 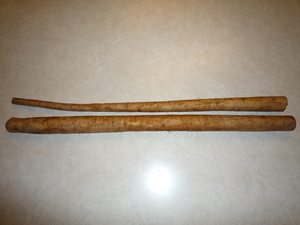 When you clean gobo, cut it in half and point one end in the sink. Use the back of your knife and run it down the gobo and scrape off the skin. Try to peel the skin quickly and wash it off before the gobo oxidizes. Have a bowl of water ready for you to drop your gobo in as you cut it. 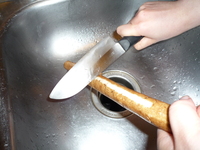 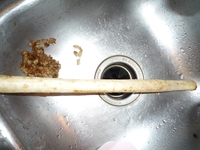