Ingredient in the Spotlight: Umeboshi

Pucker up and savor that umeboshi! Umeboshi is one of those things that's probably an acquired taste. I grew up eating umeboshi and being spoiled, I only ate umeboshi that my grandmother made. I have to admit, I don't think my first taste was all that pleasurable since I didn't particularly like sour things as a child. It was probably after years of my mother sneaking it into dishes and watching my grandmother take so much care in making them every summer that one day I woke up and was in love with it. I actually remember the exact moment that I decided I liked it. I was hanging out with my mom and grandmother in my grandmother's kitchen and she had a ceramic bowl on her table with ume-katsuo (umeboshi and dried bonito flakes). My mom started picking at it and eating it with with her chopsticks and went on and on on how oishii (good) it was. I decided that I wanted in on it and grabbed my chopsticks. I knew what umeboshi was and I knew what katsuobushi was, but I never expected the combination to be quite so wonderful. Ever since that day, I've been a fan of umeboshi.

I once saw a t-shirt that said "you are the ume of my musubi (rice ball)." I think that t-shirt sums up how I feel about umeboshi. It's the heart of a meal. It brightens up dishes not only with it's bright red color but with it's salty and sour flavor. Many bento boxes come with a single umeboshi in the center of the rice, making it look like the Japanese flag. (Is that strange because in Japan it's so normal.)

Umeboshi is said to have many health benefits.
1) The citric acid stimulates saliva secretion and is said to help regain your appetite. The increase in saliva also helps with digestion.
My grandmother told me that in the old days, people would hang an umeboshi from the ceiling on a string and lick it to regain their appetites.
2) It is said to have many medicinal properties such as helping with fatigue. In Japan, rice porridge and umeboshi is served to patients to help them regain theirs strength.
3) It was used as a home remedy to reduce fevers by smashing the umeboshi into a paste and applying directly to the forehead.
4) It was also used as a natural preservative and antibacterial for foods. One of the reasons umeboshi was a popular filling for rice balls was because it didn't go bad without being refrigerated. During the Sengoku Era (approx.1467-1568) when Japan was going through civil war, it was popular as an antibacterial that helped warriors keep themselves healthy and strong.

（南高梅）Nannkoubai umeboshi is king of the umeboshi from Wakayama Prefecture. They come in many sizes. I think this one is a 3L. 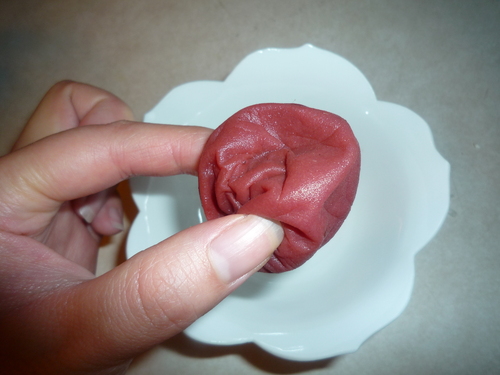 Umeboshi is salted and flavored with red/purple shiso and is finally ready to be sun-dried. Umeboshi are typically dried for three day before they are stored. 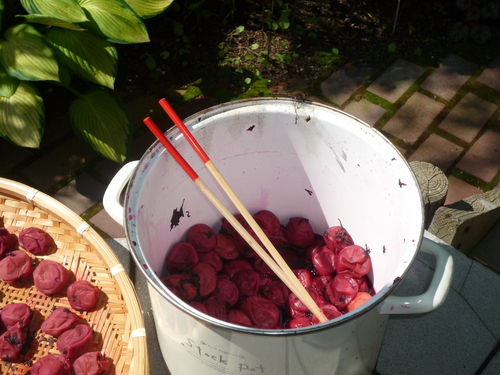 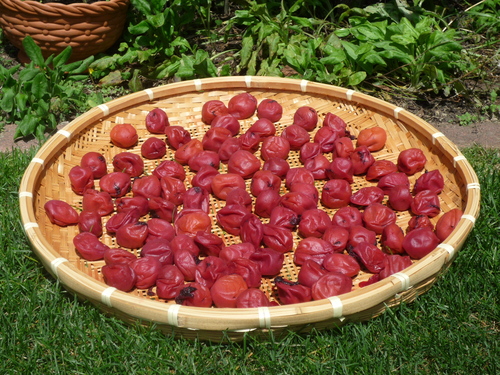 I used mini chairs to give the ume a little lift away from the bugs. 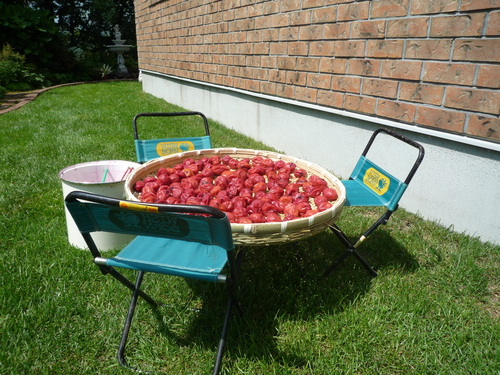 Umeboshi Fun Facts:
**Ume was introduced to Japan through China and was being consumed by at least B.C.200.

**The oldest existing umeboshi in Japan was pickled during Tensho year 4 (1576). The umeboshi is said to be in good condition and it's assumed that it is still edible.
tags: Umeboshi